Written by Adron Hall and published on December, 31 of 2017.

I need a tool just to do some testing against an API end point. I figured I’d throw one together real quick in Go. With a few libraries it’s just a few steps to get the job done. The following is that project. Eventually I’ll create the services that will run in some containers I’ll throw into a Kubernetes cluster, but for now, it’s all CLI. Onward. 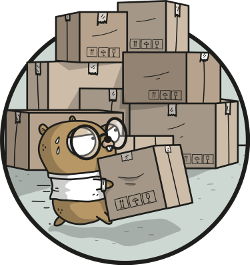 Before Cobra, there was one prerequisite that I already installed. I had the Go dep command installed for dependency management. You can install or upgrade your dep with brew, with the following commands.

If you’re not using MacOS and brew, you can just use the standard go get route and run go get -u github.com/golang/dep/cmd/dep. The first command at that point to start managing dependencies within the root directory of your project is dep init. More on that in a minute.

First I need to insure I have the Cobra CLI to use to generate out the initial code for the CLI itself. To get Cobra installed use the standard go get for this too with go get -u github.com/spf13/cobra/cobra. Now I can type cobra init github.com/adron/thrasher to generate the initial skeleton of my CLI.

The folder is now generated in my Go directory, under the standard convention /src/github.com/adron/blueland-cli/. Now I navigate into that directory and get some of the command stubs started. I want the following commands available with my CLI.

This command I’ll use to start calls of generated data against an API end point.

This command can be used to set the end point in which to send data to.

This command can be used to check what the URI is that the requests will be sent against.

This command can be used to verify that the configured URI is set appropriately.

At this point, this seems to be all I’ll need. The commands I’ll issue to get these are as follows.

To test these commands out, verifying the skeleton code is in place, build the CLI with a simple go build in the root. The result looks like this.

Now a quick git init and addition of a .gitignore file with he following contents.

Wrapping that up I added the code to the repository here.

Next thing I setup the project with the dependencies I have so far. Using dep that included the dep init command. That looks something like this on the first pull of dependencies. 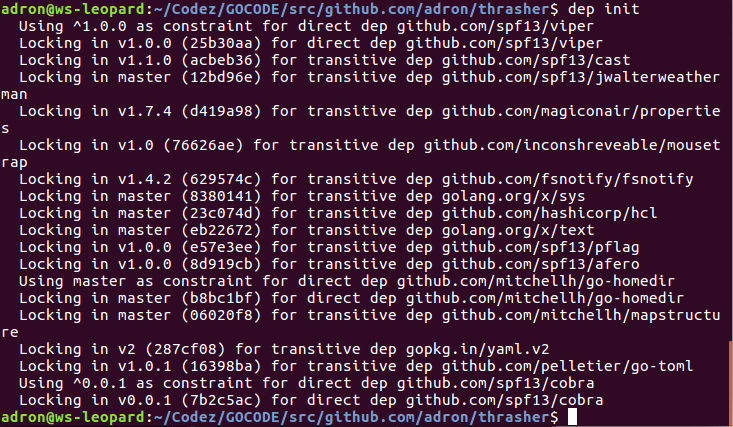 When I ran this command, dep completed the folowing actions.

For more information on dep check out the project README.md.

The next dependency I’ll add is faker with the following dep command.

The CLI starts with one of two states. It either has a testing URI that the CLI will execute tests against or it doesn’t. The CLI need to check for this every time a command is executed. If it doesn’t have or can’t find the configuration a message should appear stating what is missing and then exit out. If the configuration information exists then we can continue forward.

For this, I did a quick search and realized that I would likely benefit from using the Viper Project. This project is already included with the Cobra Project so I can just dive right in. Which is exactly what I’ll do now, but I must add that I’ll elaborate more extensively on what all has been generated for us after a little code is written.

First I’ll open up the main CLI code that I’ll use just to try out some fake data examples. The generated code file that Cobra built for me looks like what is below. It’s located where Cobra generates it, inside the cmd directory of the project, in a file called root.go.

In this file there’s a number of things to notice, but again, I’ll get back to that. For now, I went ahead and added some code in the init function to initialize and set a default for the environment variable. The init function now looks like this.

Also notice in the code above, the generated section shows a config file default location for $HOME/.thrasher.yaml. Currently I’m not using this default, but it’s setup that way by convention.

I’ll want to be able to find out what my configuration setting is for the environment variable using the thrasher config view command. To do this, I add a few lines of code in the view.go file. Inside the view.go file there is the variable assigned to the pointer location of the command, which I’ve edited to print out the evnironment variable that is set for the URI.

Alright, view is setup, now I want to setup verify. In verify I want the uri checked, an HTTP get issued against the URI for verification, and a respective response from the API end point. If that doesn’t come back, and an error occurs I want to handle the issues that might come up.

The first bit of code I’ll add is getting the URI path with viper and issuing a get request against the URI end point. I’ll add this to the verify command pointer func.

Now I’ll add some error and if else logic to display appropriate messages, display of response, and related information.

Now, I’ve got all the pieces for verify in place. The completed keeptTopVaribleLines and verify command pointer func look like this now.

Alright. Now with a quick go build this will give me a partially functioning CLI tool.

In the next post I’ll wrap this up and get some of the data generation to post data against the end point. For now, happy Go hacking. Any questions, ping me via the Twitters @Adron.

Posts for this series.